This twist on the classic potato gratin is made with turnips, making for a light, delicate flavor. The top of the gratin turns a beautiful golden brown while roasting on the grill. The earthy flavors of fire and root vegetables meld beautifully with sweet caramelized leeks and a luscious blend of cheeses for a truly memorable take on this popular dish. 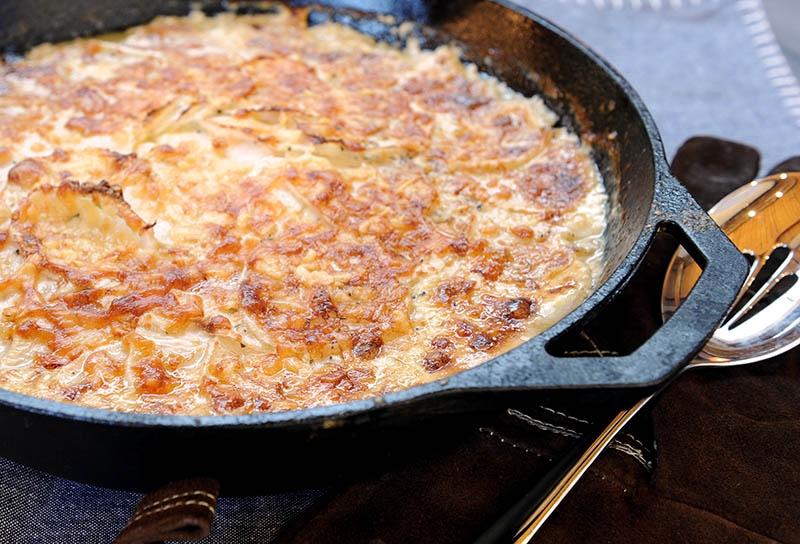 Prepare the grill for indirect grilling with cooking temperature of 350°.

Before you chop the leeks, slice them lengthwise until you reach the core. Do not slice all the way through. You don’t want to cut the leek in half. Begin chopping the leeks crosswise about ¼-inch thick, creating long, thin strips when unraveled. Soak the leeks in a bowl of cold water for about five minutes to remove any dirt. Drain and set aside.

Since caramelizing onions can take a while, you may want to use a cooking oil with a higher smoke point so the onions don’t burn. I like to use a combination of vegetable oil and butter.

In a large skillet, heat the oil and butter over medium low heat (low if you’re using a Kalamazoo Cooktop) until the butter is melted. Stir in the leeks and salt. When the onions begin to soften, after about 5-7 minutes, stir and cover the skillet with a lid. Remove the lid every few minutes to stir. The leeks should be golden brown after about 20-30 minutes. Remove from heat and reserve.

Place all of the ingredients for the cream mixture in a medium saucepan and bring to a simmer over medium heat. Make sure the cream does not reach a boil. Remove the saucepan from the heat and use an immersion blender to create a smooth mixture. Let the cream cool to room temp.

Peel the turnips and slice thinly, about ⅛ inch. I used a mandolin to speed up the process and ensure even thickness. Pat dry to remove some moisture and place turnip slices in a large mixing bowl.

Combine the two cheeses in a separate bowl and set aside.

Once the cream has cooled to room temperature, pour it over the turnip slices and mix with your hands ensuring each slice is coated with the mixture. Drain the turnips using a strainer and reserve the remaining cream.

In a 12-inch cast iron skillet, rub the cut garlic on the sides and bottom of the pan, then coat the pan  with the softened butter.

To begin assembling the gratin, take half of the turnips and begin overlapping the slices in a circular pattern to cover the bottom of the pan. Pour in half of the cream mixture, then sprinkle with half the caramelized onions and cheese. Repeat the layering process for the turnips, pouring in the remaining cream, and topping with the rest of the caramelized onions, then the rest of the cheese.

Place the skillet in the indirect zone of the grill and let the gratin bake with the hood closed for about 60-90 minutes. Rotate the skillet every 20 minutes to ensure even cooking and browning. The turnips are done when they can be easily pierced with a knife. Before serving, let cool for about 15 minutes to allow the sauce to thicken.