There are two keys to great short ribs: one, braise them slowly until the meat is so tender it is about ready to fall off the bone; and two, crisp them quickly over a direct fire right before serving. Pairing them with hearty accompaniments is also a must. This recipe gives you simple instruction for achieving the perfect short ribs, braised in Belgian ale, and we can guarantee the accompaniments will be a hit. Roasted cauliflower, fingerling potatoes and cherry tomatoes are lightly caramelized and flavored by apple wood smoke. Roasted pumpkin seeds add a special touch of the Fall season. 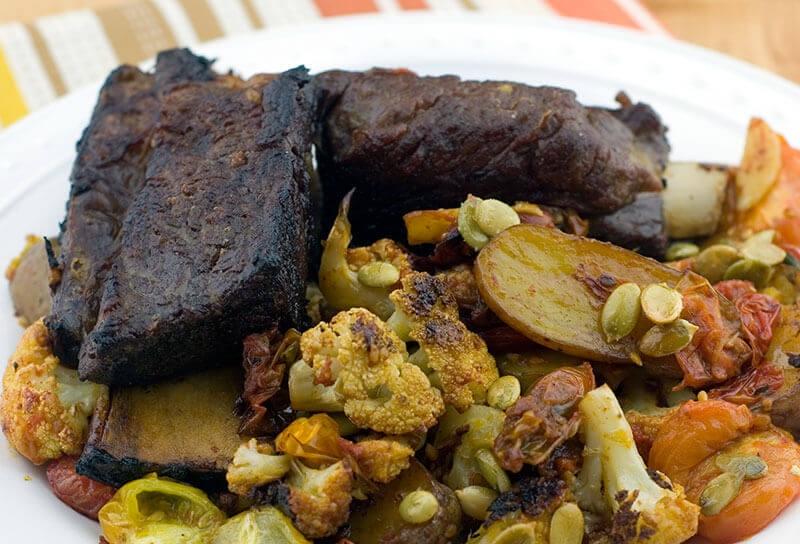 For the short ribs

For the roasted vegetables

Prepare the grill for indirect cooking at 400°F (I prepare this dish on a Kalamazoo K900 Series Hybrid Grill. Because the food is cooked in skillets, I set it up for gas grilling and made foil smoking envelopes for the apple wood. The K900 should run at 400°F with 1 main burner control zone on high, 1 on low, and 2 off).

Preheat a cast iron skillet directly over the fire. The total cooking time will be about 3 hours with wood smoke added for the final hour.Liberally salt the short ribs. Add a small amount of oil in the preheated skillet. With the skillet directly over the fire, brown each side of the ribs for about 3 minutes per side. Avoid overcrowding the skillet.

Cover and continue indirect cooking for another hour. At the 2-hour point, turn the ribs and the skillet again and add the vegetables to the grill (details follow). About 1 hour and 50 minutes into cooking the beef, add 2 more skillets to the grill to pre-heat.

Close the grill and continue roasting for 15 more minutes. The cauliflower and potatoes should be browned around the edges and starting to turn crisp. During the final 15 minutes of grilling, roast the pumpkin seeds in a small skillet over a cooktop burner at medium heat, tossing constantly until brown and popping. Drain on paper towels.

At the 3 hour mark, transfer the braised ribs from the skillet onto the grill grate in the direct grilling zone. They will be very tender at this point, so treat them gently. Crisp up the outside of the ribs over the fire for a few minutes, and then transfer them to a serving platter.

Transfer the roasted vegetables to a serving bowl and toss them with the roasted pumpkin seeds.