An Outdoor Kitchen at the Heart of a Backyard Resort Let’s just say it was the apple orchards of South Glastonbury, CT that made them do it. The apple farms, beautiful scenery and country living drew them in to buy the dirt that they would sit on for six years while hoping to “one day being able to build a (dream) home” on it.

That day came in 2012 when the homeowners’ completed a custom-built Arts & Crafts-style home.

But this is a story about a part of the house the homeowner called “an afterthought, an add-on, a wish-list item, a hope, a dream -  “which was the best decision I made.” “Building the house was not an easy task. Even though I hired a builder making all of those decisions with my wife was not easy. However the backyard resort idea was mine, and mine alone. I was determined to build a resort like experience."

The afterthought is the fully independent outdoor kitchen, dining room and living space that features a wood burning fireplace. Out the backdoor between oak and maple trees lies an outdoor sport-court, a swimming pool and of course the apple orchards. The original design for the home planned a small 12’ x 12’ concrete pad that was originally going to be a simple screened porch.

The idea for an outdoor kitchen became alive as the landscaping was being installed. Since it was essentially an addition to the house, the homeowners brought together the architect, builder, A/V consultant, interior designer and lighting designer to bring his “outdoor dreamscape” to life.

“Architect John MacFarlane of JWM Architects designed my house, so it was a natural fit to have him work on the outdoor kitchen. My builder also helped with ideas and placement,” said the homeowner. “Linda (of Linda Black Interior Design) advised me on colors, granite and layout and Robin (of Lighting Design by Robin Doerfler) really knows lighting and advised on lighting and fan placement.” 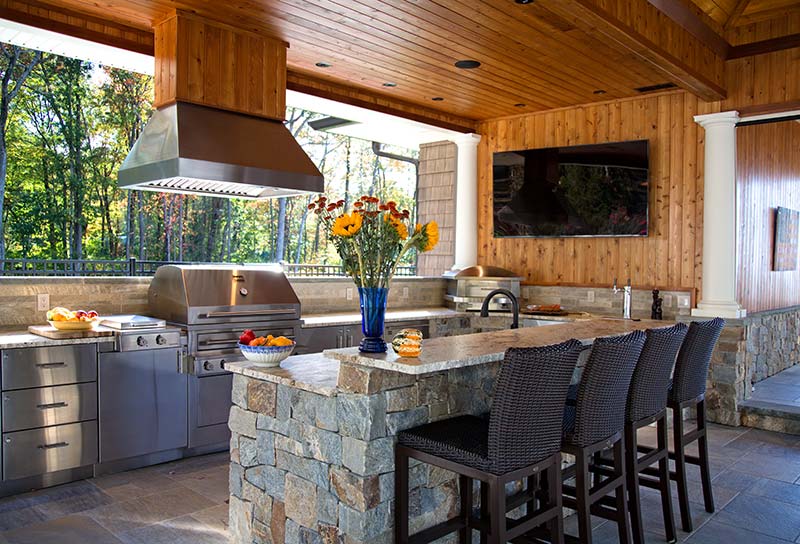 The outdoor kitchen is fully equipped to function independently from the indoor kitchen.

There were three goals in constructing the outdoor kitchen and the space around it: create something impressive, make it easy to stay outdoors and capitalize on the properties magnificent views. Making it easy to stay outside quickly floated to the top as the most important goal and it drove most of the design considerations.

The outdoor kitchen made the mandate possible. As the nucleus of the space, it had to have the same capabilities as an indoor kitchen. The owners and their guests had to have everything available outdoors, including plates, napkins, cups, even corkscrews.

Weather-tight cabinetry was chosen for its ability to keep any errant rain and snow out of the interiors so the homeowner could safely store everything from pots and pans, to table linens and cleaning supplies. Refrigeration needed to keep food safe and beverages cool on the hottest days, so the homeowner chose appliances that had forced-air cooling to ensure a consistent interior temperature. A two-drawer refrigerator was installed, along with a keg tapper and a beverage center. A Hybrid Fire Grill, an Artisan Fire Pizza Oven and a two-burner cooktop were selected to handle the cooking. 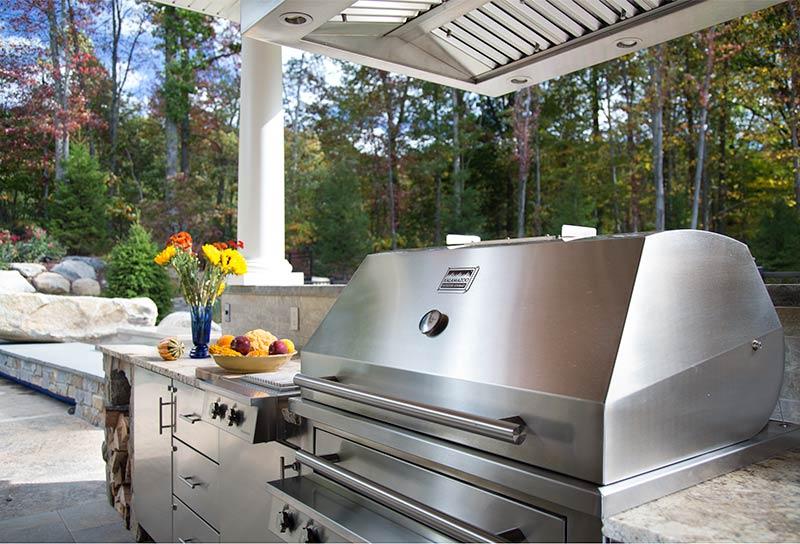 A roof was built over the space to protect it from exposure to the sun and other elements. Hidden around the dining area is “a phantom screen wall system that with the touch of a button descends and encloses the dining area with three walls of screen protection,” said the homeowner. Also hidden in the ceiling, and throughout the grounds, is a Creston audio/visual system that is simply controlled by an I-Pad. An enclosed outdoor shower complete with bathroom and change room fully assures privacy while allowing family and friends to remain outside and feel secure and comfortable.

In the end, it was mission accomplished for the homeowner: a resort-style space that featured an fully-independent outdoor kitchen, dining and entertainment area that keeps everyone outdoors, enjoying each other’s company and the view that was originally inspired by the neighbor’s fruit farm. 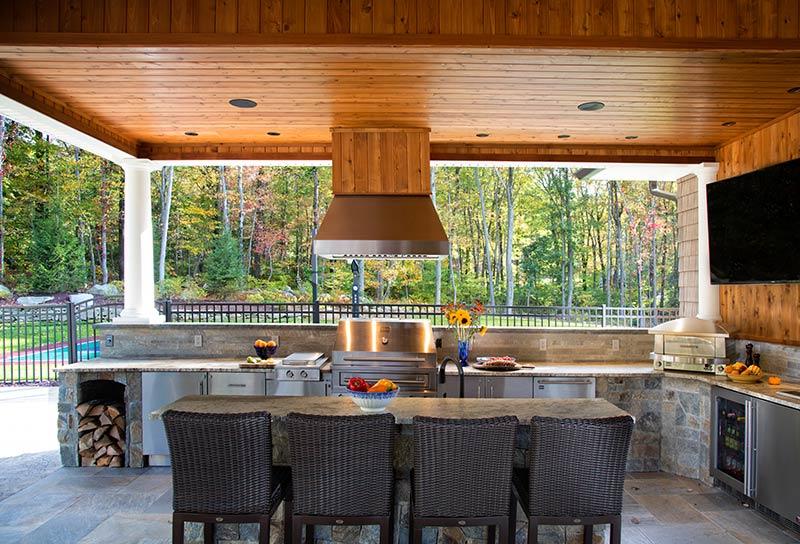 IT’S ALL ABOUT THE DETAILS

The countertop is Lapis Beige Granite. The edges of the countertops feature a broken edge style with a leathered finish

Floor tiles are green Unicomm Quartzite that was imported from Italy

The sink and faucet are by Siligranit and Grohe

The dining room includes the Carlisle Dining set from Frontgate. The table is handmade and features hand-painted tiles that were imported from Italy

All photos by Caryn B. Davis Photography.