With the exception of a perfectly-executed classic Buffalo wing, I most enjoy a hot wing that brings together sweetness and spice. That is why we are teaming up peaches and Habanero. Bourbon joins the roster to add a layer of complexity. 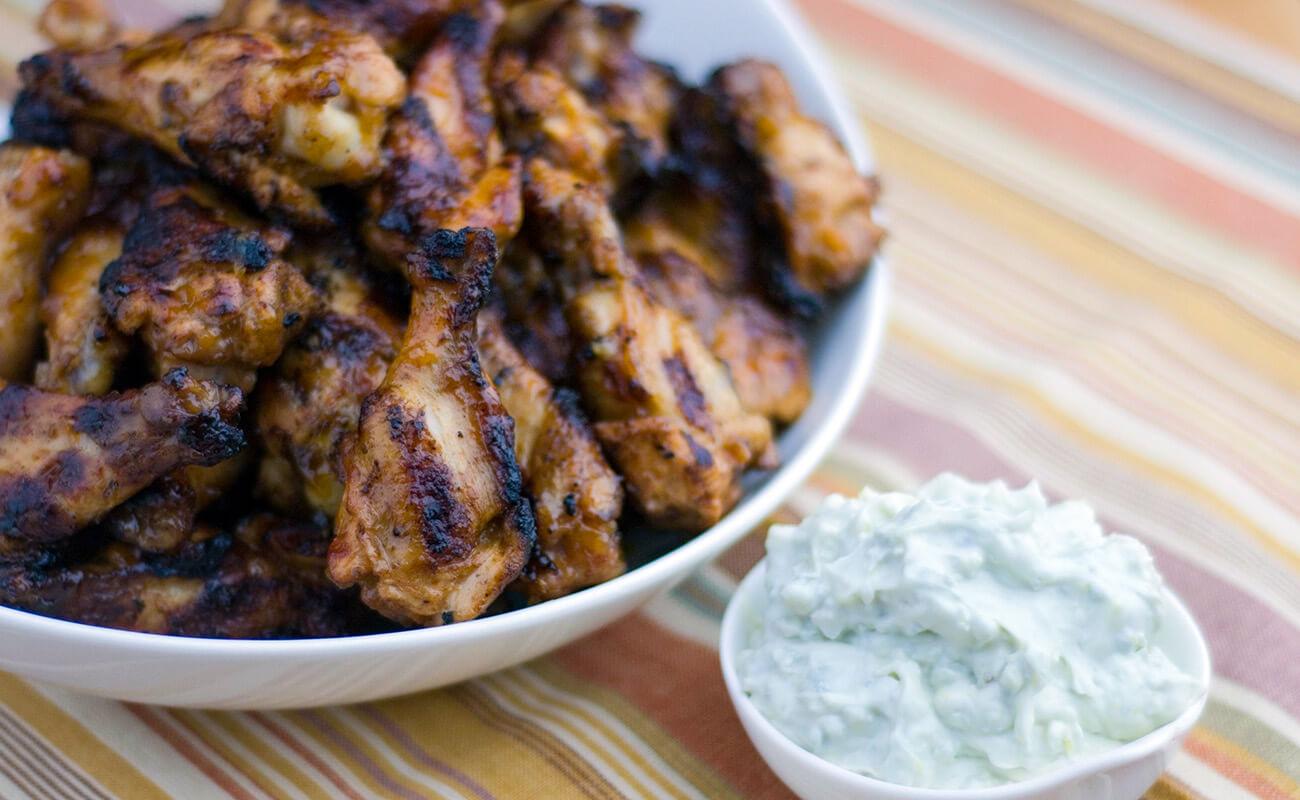 Whisk together all marinade ingredients (except the chicken) in a large glass mixing bowl. Rinse the wings under cold, running water and dry with paper towels. Add the wings to the marinade and stir to thoroughly coat all the wings. Cover and refrigerate.

The wings should marinate in the refrigerator for 4 to 12 hours, whatever timing is most convenient. Turn the wings occasionally to ensure they are well-marinated.

The dressing can be made up to 24 hours ahead. Combine the mayonnaise, sour cream, lemon rind and pepper in a bowl. Stir in blue cheese until well mixed. If the mixture is too thick, stir in buttermilk, a small amount at a time, until you like the consistency. Cover and store in the refrigerator until serving.

Preheat the grill for indirect cooking at 400 to 500°F. If you are using wood chips, get them smoking. For gas grills, I find it easiest to use a quick smoking envelope.

While the grill is heating and smoke is starting, prepare the glaze. In a medium saucepan, melt the butter over low heat. Add the preserves, brown sugar and habanero, stirring constantly until the preserves have melted. Stir in the bourbon and keep warm over very low heat until you are ready to baste. Keep an eye on the pot because the sugars can easily caramelize or burn.

Put the wings on the grill in the indirect cooking zone. Discard the marinade. Cook the wings with the lid closed and the grill at 400 to 500°F. Turn the wings every 5 minutes until the skin is golden brown and starting to turn crisp, about 20 to 25 minutes. Baste the wings and continue grilling for about 10 more minutes, basting lightly every 2 minutes. If the basted wings are not caramelizing over indirect heat, move to direct heat for no more than the final 2 minutes. Serve the wings with blue cheese dressing and celery sticks.

Note: As written, I would describe these wings as “medium” hot. You can prepare them with varying degrees of spiciness, depending on the hot sauce you use in the marinade and the number of habaneros in the glaze. Whether or not you discard the seeds and ribs from the peppers will also have a big influence on the heat.