Campfire cooking in a Dutch oven is fun for the whole family, whether you are camping or not. Our Harvest Bread Pudding is just one great idea for campfire cooking inside the Kalamazoo Gaucho Grill. This luscious bread pudding is loaded with a harvest of pears, cranberries and walnuts, plus a cinnamon swirl for festive flavor. We lightly toast the bread over the wood fire before making the pudding for extra campfire essence. 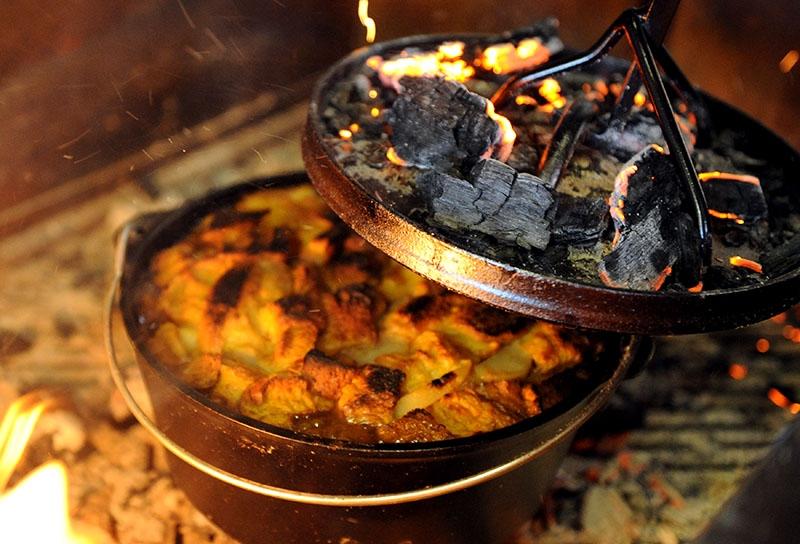 For the cinnamon swirl

Build a small fire in the Gaucho grill, about 6 logs stacked log cabin style in the right end of the grill.

While the fire is getting started, combine the eggs, ¾ cup brown sugar, milk, cream, vanilla, maple syrup, and nutmeg in a bowl. Whisk to combine.

Prepare the cinnamon swirl by first melting the butter in a nonstick pan. Stir in the brown sugar and cinnamon until well combined. Remove from heat and reserve.

Once the fire is reduced to coals, spread them out a little. Lightly grill the bread slices over direct heat on the grill grates to dry the bread and infuse with subtle wood flavor. Remove from the grill and cut bread into 1-inch cubes.

Generously grease the inside of the Dutch oven with butter. Add a layer of bread, topped with some of the raisins, walnuts, cranberries and pears. Drizzle on a little cinnamon swirl. Continue layering the dry ingredients and cinnamon swirl until you have used them all. Gently pour the egg mixture over the top, distributing it well. Place the lid on the oven.

Relocate about six good-sized coals to the center of the left side of the grill, arranged in a single layer roughly 10 inches around. Place the Dutch oven on top of these coals, using its tripod legs to keep the bottom above the coals. Add about 6 good-sized coals to the lid of the oven, spread evenly across its surface. The bread pudding will cook slowly inside the Dutch oven from above and below. Do not use too many coals, or the bread pudding will burn.

Total cooking time should be about 1 hour. A couple of times during cooking, rotate the Dutch oven above the coals and the lid on top of the oven for even cooking. To ensure you have fresh coals to maintain temperature, you can add a small log or two on top of the coals in the right side of the grill (well away from the Dutch oven). This will generate more coals in case you need them.

When the internal temperature of the bread pudding reads 170°F, carefully remove the Dutch oven from the grill. Place it in a safe place on a heat-resistant surface to let it cool.